In 1850, Takdah along with 13 other villages was annexed from Sikkim by the British. There were two blocks then, namely Bidur Singh’s and Pemchada’s. A record in Calcutta Gazette published in 1876 show that Takdah Block was gazetted by a notification on 04 November 1876.

However, Takdah was merely a 1.3 square miles of forest in its early days. Although, the Darjeeling Tea Company established Takdah Tea Garden between 1860 and 1864 along with three other tea gardens, namely Ging, Ambutia and Phusbering but the work for clearing forest land and converting it into tea plantations only began after a divisional head quarters bungalow was built at Takdah in 1879-80 at a cost of Rs. 2500.

Within a few years, Takdah became a settlement for tea planters and plantation workers. Located between a very suitable elevation of 5000 feet and 6500 feet, the Takdah range which branches off from the main Senchal ridge and extends in a north-easterly direction to the junction of Tista and Rangeet Rivers became one of the hotspots for tea cultivation. The suitable climate and elevation also encouraged the development of nurseries in Takdah region. Initially, the nurseries used to work on Cinconha and similar plants but soon the orchids became the most popular stock for the nurseries in and around Takdah. 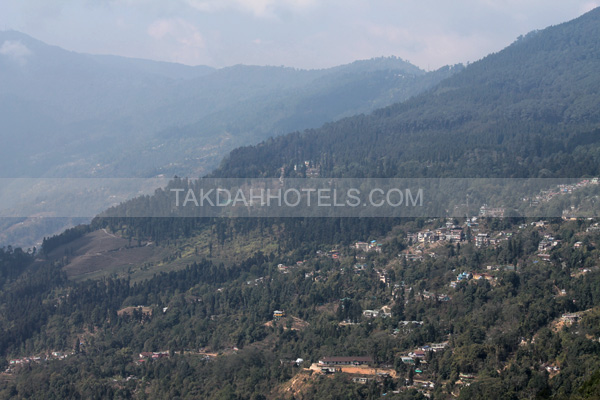 However, Takdah remained a busy hamlet with nurseries, tea garden offices and a few village houses until the early decades of the last century. Takdah was chosen as a military cantonment for British officers and Gurkha troops just before World War I (1914-1918). In a very short time the British Officers arrived and Takdah soon experienced a construction spree of Single Man Barracks and Army Officer’s Bungalows. Takdah became a little England within a few years with its own churches, clubs and markets at Dokan Dara. All the British bungalows of Takdah were built between 1900 to 1918 and most of them served the purposes for British troops engaged in World War I. Some of the bungalows were also used as churches and clubs and few were even enlisted as medical centers for injured soldiers. Takdah served as a small town where German prisoners of World War I was imprisoned and subject to rigorous labour. Many of Takdah’s public works like building “guard walls” and bridges were done by German Prisoners of War.

Primarily, there were two types of bungalows in Takdah – the Single Man Barracks and the Officer’s Bungalows. The Single Man Barracks were meant for Gurkha and British soldiers who were allotted single rooms with attached bathrooms. There used to be five or six such rooms adjacent to each other sharing a single verandah and a single kitchen. On the other hand, the Officer’s Bungalows were meant for Officers with families. These bungalows would usually have two to three bedrooms, complete with Sitting rooms, private balconies, guest rooms and servants’ quarters. Few of these Officers Bungalows were even double stored. All bungalows, were decked with gardens and most of the rooms had fireplaces.

Today, Takdah is a busy tourist destination known for its rich heritage, lush tea gardens, hanging bridges, pine forests, view points and a fabulous orchid center. Some of the bungalows have been renovated to its former glory by its present owners and is being operated as resorts and home stays. Even today, Takdah exudes the old-world charm of a British Cantonment and staying a few days here is like time-travelling.